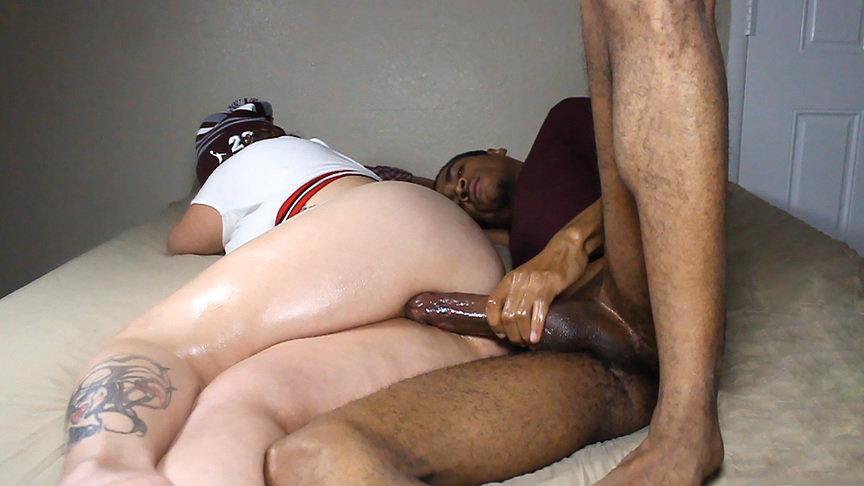 She's a tattoo artist and wants to someday be fully covered tattoo model. She accepted an offer for a photoshoot and a free massage. She leans over and pulls down her pants to reveal her gigantic booty. Then he starts grabbing her ass cheeks and spreading them open wide. She was fine with all of this and kept her ass in the air for him to play with. Since she was OK with him spreading her ass open, he tries even more nasty things on her. He pulls out his dick and starts rubbing it on her ass crack. As his erection gets rock solid, you can see his pre-cum sticking to both of them. She climbs on top and allows him to rub his dick on her pussy from the bottom. He taps and touches her clit with the tip of his cock, while humping her as if he's fucking her from underneath. She lays on her side and sticks her ass out to let him slide his cock between her ass cheeks and thighs from the side. The sensation from her massive ass slapping against him while his penis was being squeezed by her legs made him get super hard. Sometimes during these ass worship/fetish videos, the guy's cock accidentally slips inside her pussy, especially when she's really wet like Naiya was. When he feels it slip in, he can't help but push it deep inside her a few times before he takes it out. This is only supposed to be an ass rubbing video, so no fucking is allowed. She lays flat and he strokes his cock between her ass cheeks while on top of her. Then, he blasts off a white, thick load of cum on her ass and back.
Male Actor: Dwayne Powers


Shoot Your Load All Over My Ebony Soles


Ebony Thigh Fucking From Behind